Testing out yet another photo-sharing web service..
My post on EXPOSURE

Sometimes you find yourself in an interesting spot.

Here we were exploring the powerplant at Oak Knoll Naval Hospital.

The boilers were nice and crusty, peely brick and rusty.

Found a door that opened and decided that light painting would be fun.

so i set up a remote speedlight just inside the door way to light interior, and painted exterior w flashlight. 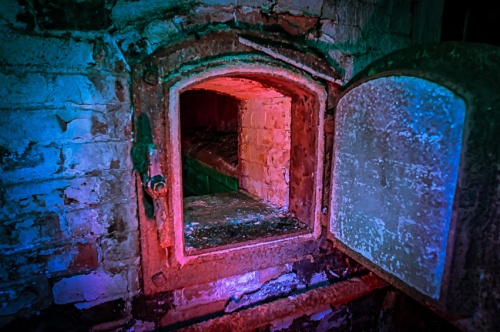 Unfortunately when i reached to get it, i managed to knock it over and it dropped down inside the boiler itself.

So I wiggled thru to get my speedlight, then looked about and realized what a cool space!

so decided to paint some more, with gels on my flashlight. 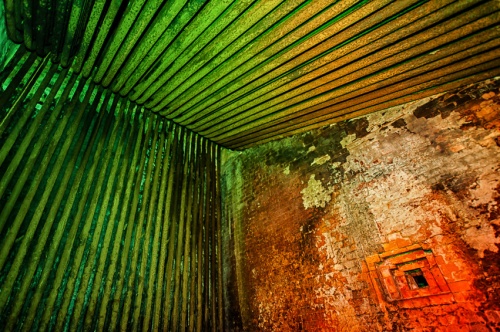 had my wingman shine a light in the square observation portal on the wall.

It kinda gets lost in my bright lights.

Don’t know what was inside, but it was pretty deep with flakes of some metal…

Fortunately i wore gloves… and a mask…!  😉

Now, would like to learn how these things worked!  Guessing flames came from the round openings, warming the water in the pipes that ran across the wall and ceiling..

A night in the desert

Explored a number of places over a whirlwind weekend in Arizona.  One stop was an abandoned rest stop, under a full moon.

Capture Pro v2, brilliantly designed to hold your camera on any strap or belt.

I was sooo stoked to get this last week. Had signed up for Peak Design‘s kickstarter campaign, thanks to a post by Trey Ratcliff. Such a cool idea. And a brilliant execution, you can tell a lot of thought went into it as each feature works well. Tested it, worked great moving camera from belt to Manfrotto tripod. Looking forward to using in the pits at Treasure Island Music Festival when i have to shuffle dual backs or change lens.  Will post more reviews soon.

Jack Bauer Bakes the Hell Out of Cupcakes

The “TUNA FACTORY” of Alameda

Two abandoned warehouses sit in a fenced-in NE corner of the former Naval Air Station, which closed 15 years ago. Driving by a week ago I noticed the number of tractors and cranes at work tearing down the wooden roof and walls. As they did, the demolition exposed a bunch of graffiti on the concrete walls that remained. What caught my eye was “Swappy’s” giant iconic yellow horned-skull thing. I’ve seen his work in Detroit, New Orleans, Buffalo, Salton Sea, NYC, and all about the bay area. I had to get a snap of it.

I learned that this activity was set in motion when Alameda’s Planning Board approved the subdivision of the base parcel allowing actual building to start on a 10.2 acre pad (Parcel 1), which is the area where the warehouses are located.  This was in order to make way for a new Target store and some housing. Wednesday July 18 marked the  groundbreaking for first phase of the Alameda Landing development, and demolition of the warehouses began soon after. Amazing that after all these years of talk, there is activity on the base! But sad, as these vintage bldgs and urbex locations are disappearing…  (Interesting too is that this parcel includes that base hospital which mysteriously burned down a few years ago, where the AFD responded to three separate calls to put out fires, all in the same night, finally letting last one go due to the “presence of accelerant” and crew safety issues. How convenient the developers don’t have to deal with all that asbestos and lead paint… but i digress).

So it appears that for at least the last 5 years or more artists have been sneaking in to paint the interiors with large works of art, aka burns. The graffiti inside these huge structures was wall to wall, floor to ceiling in most places, 2-3 stories high. The floor was littered with empty spray cans, disposable gloves, and dried up rollers. The volume of work was amazing, perhaps comparable to SF’s old Tuna Factory – which met with a similar fate.

Here are some images from a few day and night visits I made in the last week, hoping to capture as much as possible before it was all gone.  Art on the wooden walls and giant sliding fire doors of the eastern-most warehouse were long gone, but i got most of what was left in the other bldg. See if you can read them. I’m sure this place had a real nickname. If you know, please share. Enjoy! 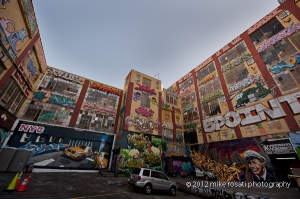 Had a recent trip to NYC to visit my buddy Steff, who took me to some cool places. One of which was 5-Pointz, “the” place for serious graff. We got there the day after they wrapped filming for a Morgan Freeman flick, some action thriller due out Jan 2013. Met one of the volunteers, ZROK, who made a mural with Auks and Zimad using leftover cans from the other artists, recycling if you will (see Angry Birds pix). He gave me the lowdown and quick a tour of the complex. The entire space is covered with amazing burns, by artists from around the world. There is a cool bar/pub on the NE corner of the complex, The Shannon Pot, which has some killer deals, like a bucket of 10 iced PBR for $20. The Space Womb Gallery is next door.

No sense in reinventing the wheel, so here’s more background from Wiki:

5 Pointz: The Institute of Higher Burnin‘ or the 5Pointz Aerosol Art Center, Inc. is an outdoor art exhibit space in Long Island City, New York, considered to be the world’s premiere “graffiti Mecca,” where aerosol artists from around the globe paint colorful pieces on the walls of a 200,000-square-foot (19,000 m2) factory building. The complex owned by Long Island developer Jerry Wolkoff houses the Crane Street Studios in which 200 artists pay below market rents for studio space. In 2009 a 450-square-foot (42 m2) studio was listed as renting for $600/month.

It was announced in March 2011 that Wolkoff plans to redevelop the property to build high-rise residential towers, putting the future of 5 Pointz in jeopardy.

History: The complex was first established as the Phun Phactory in 1993 by Pat DiLillo under a program called Graffiti Terminators to discourage graffiti vandalism by encouraging artists to display their work in a formal showcase.

In 2002 Jonathan Cohen, a graffiti artist operating under the name “Meres” began curating the work. If he is not familiar with an artist, Cohen will ask for a sample of their work; if it is a mural, he will ask for a layout as well. The name 5Pointz signifies the five boroughs coming together as one but, because of its reputation as an epicenter of the graffiti scene, the industrial complex has actually united aerosol artists from across the world. Legendary writers from Canada, Switzerland, the Netherlands, Japan, Brazil, and all over the United States have painted on the building walls, including Stay High 149, Tracy 168, Cope2, Part, and Tats Cru.

Over the past decade, the striking, graffiti-covered warehouse has attracted several hip-hop and R&B stars, including Doug E. Fresh, Kurtis Blow, Grandmaster Kaz, Mobb Deep, Rahzel, DJ JS-1, Boot Camp Clik, Joan Jett, and Joss Stone. One of the first graffiti there was a portrait of Jam-Master Jay, an important member of the early hip hop musical style.

Source: Description above from the Wikipedia article 5 Pointz, licensed under CC-BY-SA full list of contributors here. Community Pages are not affiliated with, or endorsed by, anyone associated with the topic.
…
Collection of iphone and D700 snaps:

Going down the tracks to the Junction…

A evening visit to wine country. Intention was to visit an abandoned location, but it required navigating some railroad tracks. Got there at dusk. Amazed by all the great graff, started to snap with some nifty ambient lighting the cars. Was just able to get these few snaps when a trio of powerful, tight-beamed flashlights started coming towards me, and then a shout of “Stop right there!” So I did, no sense running. (The last photo was lit by the police flashlights – thx..)

Napa Police had us line up against the train, drop our gear and face the rail cars. Standard line of questions and scare tactics ensued, followed by the gathering of ID and info. They soon realized we were neither the scrapper-thieves the locals have been dealing with, nor the ones painting the cars.

Cops then actually became quite cool. We started talking flashlight tech, and about famous/notorious painters we’ve seen around the bay and had spotted around that yard. We showed them some in-camera snaps. Then they even gave some suggestions of other places with great graff. We were then escorted out of the yard with no further action taken. Bummed our plans were cut short, but we’ll go back again, via a new route, of course…

Had great adventures in the western NY back in March 2011, a day each with DEEVA and HSF.  Among all the cool stops we made, both days included visits along/near that squiggly river that separates the First Ward and the Outer Harbor.

While shooting at night I had just finished along the water and was moving towards some factory buildings when a patrol car rolled up. Cop asked a lot of questions, but once i explained what I was doing he started sharing info/history about Buffalo, his 20+ yr life on the force, and mentioned some key spots to hit. We chatted for 30 minutes on that cold night.  So I showed him my work in the camera and he said, “If i didn’t have to do traffic for the game ending in 20 minutes I’d have you hop in and take you to some spots.”  What a cool guy, right!

He was watchful as the area is magnet for trouble.  Sports event fans too cheap to pay for HSB Arena parking lot will leave their cars here (~1/2 mile away), and they get broken into for their laptops, phones, $$, etc. Though he was wondering what this guy dressed in black was doing down there, he was more concerned for my safety and the camera gear i was $hlepping…  It looks like the city is trying to revitalize the waterfront with a walkway.  Restaurants and retail likely to follow.